When We Were Kings

Flectere si nequeo superos
Acheronta movebo
The "Nick Pisa fiction"  story was not the aberration of a gormless free-lancer. It was a multiple-outlet news feed using new information provided by the McCanns, not an "exclusive": the Mail version of the same feed - which contained additional quotes - came out three hours after the original Sun piece - during the night and before the story had appeared in the paper editions. Both included a quote from Mitchell.
As in the previous clumsy feed put out by the McCanns this autumn, it was an amateurish attempt to get round the Yard "request"  not to comment on the investigation and to distance themselves from the old recognition codes used by Mitchell so they could, as always, lie about the story's origins.
__________________________
The almost forgotten American author Norman Mailer's  perverted love of violence and relentless misogyny (the two traits neatly encapsulated by his bloody stabbing of his wife) wrecked any chance of his becoming a serious writer. But the same qualities made him an excellent sports journalist, especially about boxing.
Mailer particularly liked those loosely refereed fights where "the boys", usually from poverty-stricken loser backgrounds, beat each other almost to death and occasionally, as in the Emile Griffith fight at which he was present, well beyond that point, with the loser, Benny Paret, left on the canvas to wait for the wagon that would carry him to hospital and then the morgue.
It was after that fight that Mailer wrote that, when a boxer has got on top of his opponent' he seems to get bigger, actually swells up, as he dominates the centre of the ring, while his opponent, in contrast, begins to shrink as he backs away. Mailer wrote, in a very Mailerian way, that this was a physical reality, not just a "seems so" illusion. Nobody had ever made such a suggestion before but certainly when you look at the boxers in When They Were Kings, the 1996 movie about the Ali-Forman fight in which Mailer appears (outclassed by the more genuine George Plimpton), it seems, weirdly, to bear him out. 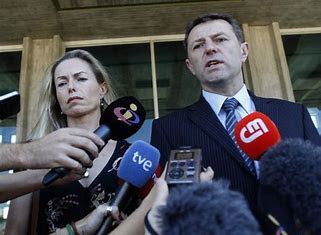 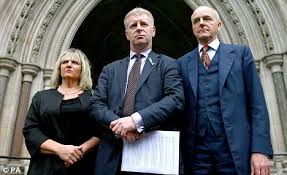 No boxer, no third rate Hendon failure,  no x-list celebrities could be more puffed up and swollen than these three  most repulsive of liars during their time on top, could they? Nasty Norman had a point.

GM at the Leveson  tribunal, little red spots of anger burning on those pasty cheeks, demanding, like some crazed Wolf Hall Henry VIII, draconian punishment for journalists who didn’t meet his approved standards. Watch Judge Leveson, who’d leered and sneered at the “little people” like David Pilditch as they testified, bend beneath this gale of malevolence  until he was able to murmur sadly, as though soothing a madman,  that what McCann demanded was against the law. Watch the recording or read the transcripts. Italics and titles in this abridged extract are ours.
Henry VIII McCann: [viciously] I think if   there are repeated offenders, then they should lose their privilege of practising as a journalist…
Little Judge: [murmurs] Quite difficult, that.  I understand  exactly why you're saying that, but just let me share with you the difficulty…what journalists do is  exercise the right of free speech…it’s quite difficult...that’s not to say that there shouldn't be penalties…holding to account…
Henry VIII: Sure!
Little Judge: But –
Henry VIII: [interrupts excitedly] Thank you, sir. [rants]…they should be held to account…
Judge Tom Thumb: Yes. [tactfully, greasily]  I wasn't criticising you at all, but I was simply seeking to explain why that particular remedy may be very difficult to apply in this context.
That would be the same Henry VIII who told Ye Olde Radio Tudor Four that "he had not read the [Sweepyface] tweet but police should be more willing to charge internet trolls.I'm glad to see the law around this area has been reviewed.  We need to make examples of people who are causing damage." No, some temporary kings don't just swell up like slugs, they act like them as well.

We were a couple of swells, We stopped at the best hotels...

They don't talk and look quite so big these days, do they?  Of course you must take our word for that because the faces that launched a million clips tend to be kept out of the media these days.
Whereas Goncalo Amaral, who shrank to a really  alarming skinniness in the days when the dodgy couple were on board Phillip Green's jet or swanking it "searching" at the Dom Pedro hotel at their private fund's expense, looks older but just fine, with much of his winner's weight  back on and, rather more importantly, the face of someone able to sleep at night with a clear conscience, not lie awake weeping. 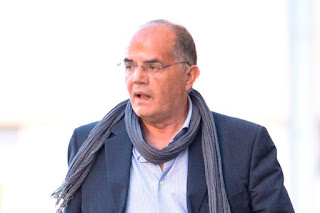 We're a couple of frauds, hiding behind closed doors...

﻿
And so back to that feed. We repeat, it was not one bad reporter who got it all wrong. It was a the terminally disorganised "pathetic remnant of Team McCann", as we described it after its  abortive September feed also went belly-up, that had fed Pisa his junk and left him to disguise it as a news report.
The attempts to find their way round the quasi-legal constraints imposed on their public campaigning by Grange have resulted in Chaplinesque farce. The newsfeed's  school playground, "if Amaral wants a fight we'll give him one" [you lost, losers] and equally childish abuse of  Amaral [grow up, losers], it's "he made all that money" envy [while yours is being taken away, losers] and it's appalling misstatements  of fact have left  the McCanns, whose purpose was to keep public sympathy [because you've got none from the police, have you?] looking absurd.
It doesn't help, of course, that in the old days when Mitchell provided the main lines of the feeds the editors themselves or senior reporters did the cutting and pasting in of old quotes made to look like current ones etc, the appropriate "pal" and "family friend"  codes and the "responses" of a named Mitchell.  Now the McCanns, while big news, don't have the status to get top people working on the feeds and the work was given to Pisa, an ignorant  nonentity,  to finish off.
They can't intimidate  the sweepyfaces of today anymore, they don't threaten to sue the MSM anymore, they can't spread fake stories about Grange anymore, even though people like Tony Bennett stand at the ready to help them do so.  Not until the current legal phony war ends.  So they're trying desperately for the only card they think they have left before then: the weepy sympathy 'n' suffering vote that made their name when they were little, as-yet-unswollen nothings. And Mitchell? You've all seen what's happened to that wreck.
Shrunken losers. 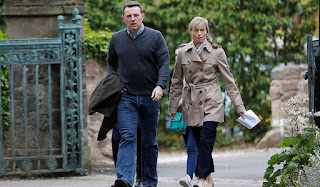 Next stop the Dom Pedro, perhaps? Or Phillip Green's yacht?
Or a guest house in Blackpool?