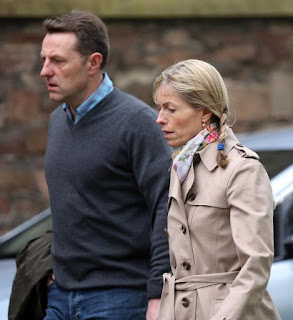 
Kate and Gerry McCann hit back at claims Madeleine woke up and left the apartment.

The "hitting back" consists of  some dodgy blah-blah from Mitchell and quotes from - guess what? - the seven year old book Madeleine.

There is not the slightest doubt that the stories supposedly from Portugal, the ones that a "family source" - oh, how tired and old these gambits are - claims the McCanns are "hitting back" against, are pure McCann stories, fed by the pair themselves.

Ask yourself - who else could it have been? Neither the Portuguese nor British police have ever used UK multiple feeds in this way in the McCann case. For the PJ it is literally impossible, because they don't have either the authorization or the contacts in Britain's media, or the trust from British editors, to get away with it; Grange has always used its own website or open media conferences followed by journalists' questions to provide background information. And for either party to try and do so would risk exposure that could only benefit the McCanns.

Who else? Goncalo's people? Not a chance. Again, they don't have the contacts and know from the past that the UK media scum would double-cross GA while pretending support, just as the Mail did years ago. There isn't anyone else with a stake in the case and a history of newsfeeds about it. Except, of course, the original conspirators, the MSM itself, which conspired with the McCanns to invent and sell the abduction story and wreck the Portuguese investigation. But they don't do feeds - they just carry them.

Who has the information to leak? Well, the McCanns are always telling us how the Yard keep them updated, aren't they? And they even had a friendly visit the other day to spell some things out. And the Portuguese public ministry and the UK ministry of justice are not so tightly bound to secrecy as both police squads. No, the Portuguese source angle is simply a tired Mitchell/McCann attempt to get round the Yard ban on their media interference.

So in  case anyone is in any doubt we aren't quoting newspapers or their bullshit as sources: we don't care what the disgusting MSM, BBC included, say or think: we're repeating what the McCanns are telling us. That is, what the McCanns want us, the public, to believe for now. Whether you believe us or not is your decision but we can promise you the Bureau is being a great deal more truthful than the erstwhile conspirators and their successors, the  MSM.

What evidence   has prompted this desperate pre-emptive stuff we don't yet know. Except that it's concrete, a threat to the couple's credibility  and involves the 100% police discounting of the abductor claim. And that, since the Rothley meeting, it's finding its way out.

We wrote this month  that the McCanns kept up the pretence that they were "co-operating with the police" in 2007 until the gains of doing so were outweighed by the constraints - that is, once the PJ turned up on August 2 with a search warrant and accusations. Soon afterwards the couple engaged a criminal lawyer and a few weeks after that they were in flight to the UK.

History is repeating itself.  We said yesterday that the McCanns  described the Yard presence in Rothley  in eerily similar terms to the pack of lies they gave us all about August 2 2007, with the identical underlying message - whatever they came to talk about it wasn't, it reely, truly wasn't, bad news for us. Promise. Not at all.

As Kate McCann famously wrote in Madeleine, "we felt we didn't have a choice".

And that's how they feel now.