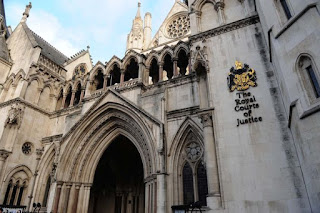 We began our campaign against the various frauds and conmen - the Usual Suspects - earlier this year. A major charge of ours was that all of them, from Pat Brown downwards, had actively improved the McCann couples' public reputation.
We founded this Bureau in 2009 with one aim only: not to sleuth, not to "be there for the child", not to put forward theories but to destroy the public reputation of Kate and Gerry McCann  by proving beyond doubt over the long term that their reputation rested on lies and deceit. That is what the motto at the head of the page means.
People like the Usual Suspects work against that achievable aim  by making such patently untrue and wicked claims against the McCanns that neutrals are able to dismiss almost all sceptical comment about the couple on the "Kier Simmons" grounds that they are all mad or wicked. That is a view still held by a majority of the population and we have the Suspects  to thank for week after week providing the evidence to confirm that view. That is the reason I attack them.
As recently as a week ago a young columnist on the left-wing journal the New Statesman confidently repeated that charge against McCann critics at length and in detail, citing as evidence that internet "conspiracy theorists" even claimed obvious realities "did not exist". It was a disturbing experience to read in a non-tabloid, idealistic journal that dislikes what it calls the "establishment", just what people think of all of us.
We originally included Textusa as a Suspect, and we accused her devoted followers not just of terrifying ignorance and gullibility  but of actively encouraging Textusa in the  fantasies. Then, concerned at Textusa's mental state, we more or less left her alone. In response Textusa posted, "we are waiting for Blacksmith to show us where we have ever lied".

So we responded by stating that she had lied in the most fantastic and irrefutable way possible by suggesting that a living person, Nick Townsend, of Gosport didn't exist at all but had been invented as part of a plot, a conspiracy by the blogger Not Textusa and others. I provided links demonstrating the truth.

In response Textusa simply refused to acknowledge any reality at all, thus proving to the letter the accuracy of the New Statesman's  claims. I repeat, most of the population think that McCann critics on the net are actually mad and cannot tell truth from fiction - and they are taking that opinion directly from the proof that Textusa, Brown, Bennett, Hidiho, Shepherd, Marsden, Roberts and Hall and their supporters offer up for them, without charge, every week, week after week. People can read.
And as a little reminder of the links between people's "harmless opinions on the net" and the real world, let me repeat  again that in the absolutely crucial  Lisbon libel trial  the only real name that the McCanns and their lawyers were able to present in evidence as "threatening the safety of the McCanns family" was the name of one of the Usual Suspects: Tony Bennett.  The only one. And their lawyers are ready for the next time: they can also read.
These are Textusa's words, taken from the August blogs. They remain up and can be viewed there now.

"As we said in our comment at 20 Aug 2018, 15:59:00, the “Nick T hoax” is as relevant as anything else that is in the [2007 McCann investigation Case] files as it shows, very clearly, the tentacles of the cover-up on the internet. Nick Townsend is just a character, an account. As we have seen, no one has been able to prove that Nick Townsend existed before May 2016."


"We taunted and we teased. We have given the impression we were being distracted. We weren’t. Nick Townsend is either a secret agent who has erased all his past off the internet (leaving only a £10,00 donation and a ref in a spoof twitter account) or he is as we say, a creation."


"Then, it was very easy to see who indeed Nick Townsend was, or best, what was the purpose of his existence."

Not one of Textusa's supporters has dissociated themselves from these psychotic ravings; not one has made any effort to make up for the damage; not one, it appears, can see that if Nick Townsend  exists then claims made in thousands and thousands of words by Textusa are pure fantasy. Textusa goes Textusa's way, dragging Textusa's disciples along. And not one of them can yet put two and two together and work out that, like the McCanns, if Textusa is irrefutably inventing on that scale, then Textusa  cannot tell truth from fiction and therefore cannot be telling the truth in the assertions about the McCanns and the innocent forty or so people that have been defamed.
Prompted by the New Statesman's rather chastening article I put a little reminder together for Textusa that 38 500 words of invented drivel about tables hadn't made the question of Textusa's personal dishonesty go away. I highlighted these questions of truth establishment - which of course lie behind the current public battle of "fake news" and are therefore significant way beyond our McCann internet circus -  this week. I did so in a mocking sketch following the time-honoured English route of presenting very real and very important issues in an entertaining form so as not to bore people.

Until today.
Late last night, while fact-checking that Court Reports sketch, I became aware for the first time that a long-term victim of Nick Townsend's perverted stalking was dead. The news was made worse by the fact that Townsend had, as recently as late 2017, publicly accused Not Textusa  of being that person by addressing the latter, madly and insultingly,  by the victim's name on a public forum. He then repeated the accusation on the Stopthemyths website where it was, to their rare credit, deleted. The dirty old man couldn't even get his stalking right.

So in a very creepy way it transpires that both Townsend and Textusa - who gratuitously named the victim for no apparent reason in the blog - are mirror images: neither of them can even tell the difference between a corpse and a living person. Neither of them can respect the living and neither of them can respect the dead.  One insane representative of the Usual Suspects, one wicked and perverted stalker and fanatical supporter of the McCanns who didn't care who died as long as he could stalk. The thing that unites them in a continuing bond is harming innocent people - and persuading their easily-led supporters  to join them in the harm they do.

I apologise to readers but all interest in continuing the Court Reports stuff drained away from me as I read of the death of this person. The deeper you go, the filthier it gets in McCann land: I feel like I've been wading knee-deep through sewage for the last few days. The McCanns are at least recognisable human beings, just: these people, and their supporters, are like horror-film creations.
Case abandoned amid overwhelming disgust and nausea at all of them.