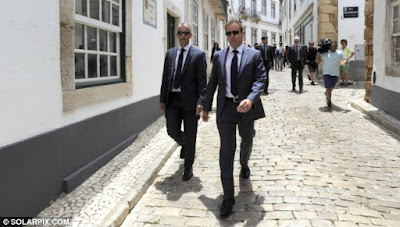 The little Bureau is famous for its contemptuous dismissal of all the conspiracy theories so dear to the heart of the under-educated anti-McCann "researchers". So it's amusing that only the Bureau is at all bothered with studying a prolonged and well-funded professional conspiracy that has been taking place for the last five years. And, judging by results, a successful one.
What results?  Funnily enough, the comments and teachings of the anti-McCann nutters themselves.
The fake suspects conspiracy started when Operation Grange reached its investigative phase, has run continually since and its last initiative took place as recently as November 2017.  The suspects themselves are either invented or plucked out of old files and shaped as needed. Or they are based on the names of people Grange has questioned but with  characteristics added that are not derived in any way from police sources.

What Do we Know about the Conspirators?

They use the MSM as the vehicle for their deceptions, not politicians or millionaire businessmen or the famous Brownshirts, the  crack Scotland Yard killer and whitewash squad. They are almost certainly a small group, but well-funded. They are, without doubt, media professionals with extensive contacts in the MSM and a serious working knowledge of how to use the hollowed-out MSM to get false stories published. It is a genuine conspiracy in the sense that there is a deliberate intention to pass themselves off to the public as police spokesmen or policemen with inside knowledge. That is where the criminality comes in.* Who are they actually working for? A good question.
Are they just  spreading fake suspects? No. The group's aims are constant and targeted. There is a clear plan of triple objectives over the past five years. These are:
The evidence and modus operandi are laid out in the footnotes/source notes below. 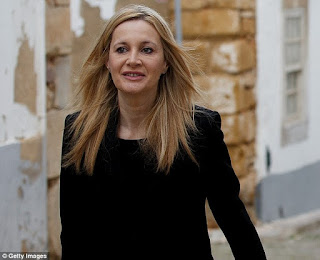 Is The Conspiracy Working?

By one, rather surprising, measure it most certainly is. For it is typical of life’s constant ironies that it's the publicly noisy  “anti-McCann” FB, twitter and website camp that has fallen more completely for this transparent bullshit than anyone else, including the majority of the “unenlightened” British public.
If you check twitter McCann now you will find  all the anti-McCann "research groups" and experts, with a few honourable exceptions,  foaming away with exactly the same message that the conspiracy has relentlessly drummed home - and into their unsuspecting minds, the poor bastards:
No more money for the Yard!  If they do this one more time I predict a riot!
Have OG given any hint of their yet again one last line of enquiry is about this time purple woman obviously got "whooshed". [sic]
Only wishful thinking and a failure to comprehend the full scope/scale of the coverup support your ongoing faith in Op Grange.
And much more.  That's what happens when you believe what you read in those utterly poisoned wells, the newspapers. The dark, slightly crazed, beauty of it is that the victims don't even have an idea that they're being played like fat, lazy  trouts.

So Who is the Conspiracy Working For?

It isn't very difficult to find the truth. All you have to do is some work, proper work - find out how many people in the UK have the expertise, experience and contacts to do the job and then research where the misdirection is pointing to  and who could possibly benefit. The MSM, who brought you the original lies, know who it is, naturally  - they've been in close contact with them during the construction of the stories, obviously  - but they won't give sources.
But first you'd  have to  take your arse out of the past, stop using poisoned wells as "sources", tear yourself away from  eleven year old, hopelessly  out-of-date case files and look, for once, at what's going on around you now. But that won't be possible for  people who, as we can see, are being so successfully played: there's no way out for them.

There you go, nice easy reading. The boring evidence is below but challenged researchers can, of course, skip it.


The professional experience also shows in the structure of the news feeds – encouraging each  MSM outlet to “personalize” the supplied stories while preserving the core provided. Thus some go over the top    with “arrests [of the ‘suspects’] soon” while others are cautious. Readers unfamiliar with MSM ways then assume that each paper  has gained the information independently, thus providing further cover for the sole originators.

*Misdirection. There is a striking and undeniable consistency in the selected "suspects". The misdirection is always:

Away from professionals with no criminal records and towards “criminal types” and “lurkers in the shadows”. Away from victims of accidents and the unpredictable and towards pre-planned crime. Away from recognizable human beings you might meet in the tube, on the plane or on a sunny beach and towards “monsters” such as the “stinking binman” dribbling over undressed girls. Away from  people with their faults and misjudgements towards  organized wickedness such as “paedophile rings”.  This is a statistical impossibility if the "suspects" are a random cross-section. The conclusion is that, for whatever reason, misdirection is at work: somebody is selecting these types - and ignoring others - for a reason.

And then the  cream on the cake, tucked away near the bottom, the final misdirection: “It is this woman in purple, the Mail understands, who is keeping alive Operation Grange, the marathon reinvestigation of the Madeleine McCann case by Scotland Yard, now in its sixth year.”

Yep, the Purple Woman is the famous last lead, not Smithman.