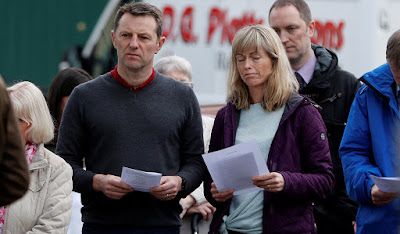 The  couple on one of their rare 2018 public appearances
A number of Scotland Yard police officers have been at the Rothley home of Kate and Gerry McCann in the last few weeks, it has emerged.
The police have refused to say anything  about why they were there, on or off the record,  and have not  confirmed that such a meeting took place.
A concerted newsfeed provided to the major tabloids, the Express, Sun, Mirror and Mail, however, brought the news of the "meeting" to the public in a series of synchronised reports, all of which featured  the McCanns' long-time spokesman.
The feed quoted a number of anonymous "sources" but none of them were from the police.
The McCanns have rarely been seen in public in 2018 and made no comment today.
The Bureau comments: As always with the MSM, the only question is: "why has it appeared?".