JB writes: A hello to one of our long term readers Carole Shooter. Carole lost faith in the Bureau but that was in the dark days of 2015 when more or less everybody else on the scene did, a process that culminated for me with that bellwether site, the Maddie Case Files, the only forum I was a member of, booing virtually every one of my few posts within hours of their appearance.
That was for my heresy in believing that Grange was a perfectly routine and  straight operation and my stupidity in not recognising that Martian Bean-Counter and Nick Kollerstrom (Auschwitz gas chambers were “disinfectant plants”) supporter Richard Hall held the keys to the case. The auto-da-fe culminated in Saint Pamalam demanding my head for calling honourable MCF member and serial libeller Hidiho a “snivelling coward” for skulking in Canada rather than facing the numerous young UK women she daily defamed. I got the message and slunk away. My, when people lose hope can’t they get f*****g nasty?
Anyway, Carole, I’ve seen from twitter  that your health hasn’t been good and that you suffer a great deal of pain without overly complaining about it, something which the angelic McCann supporters – motto “we care about innocent people’s suffering” – find as irresistibly attractive as a pool of fresh blood and dolphin guts to passing sharks. Hence their mocking of your suffering. Nice, aren’t they, those supporters? All  four of them.
But  Carole, apart from refusing to be silenced by weirdos, had something very sensible to say recently. We can all get behind Operation Grange. Simple but true. So simple that, when you think about it, what possible reason could there be for not doing so?
Because it's a fraud or a fix-up?  Don't be childish: if it's one of those then nothing you post can affect matters one way or another, can it? So what harm can supporting it do? And every possible objection from the Usual Suspects, the ignorant and the merely easily led is covered by the same answer. OK, so it's Martian Beans running Grange, you think - but what harm can supporting it do?
Carole's real service is to make one aware of just how little people who noisily support the McCanns have anything to say in Grange's  favour either. Oh yes, they make the occasional token reference but it's never expressed with anything approaching sincerity and it's normally used in the context of "why don't you stay quiet and  wait for the result?"
However much they try and conceal it, supporters of the McCanns [I exclude the filthy four who are something other than "supporters"] haven't really believed in McCann innocence since the Lisbon 2009/10 hearings. Until then they'd been sure that all the stuff about the PJ being unanimous in suspecting the McCanns had been invented by Amaral, the "lone rogue cop". The live twitter feed from  Sky - three cheers for Murdoch - left them absolutely stunned, shaken, resentful and disbelieving -  as I know because I followed the main supporters' site as the feed came through.
Since then  it has been loyalty and sympathy but not real belief and conviction. The brighter ones took the hint and deserted the cause without waiting for Amaral's later victories. The rest, like the McCanns, are stuck exactly in the position they were in when the bad news rained down   that awful day - like the victims of Pompeii. 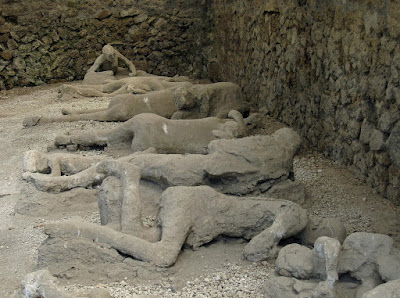 Stopthemyths forum in posting positions
If they really believed in the pair's innocence they'd be cheering Grange on.  And if the Usual Suspects really believed in their own version of events they would too. But that takes us into swampland and hidden motives and the strange determination of Bennett and his clique to help the McCanns out by doing what his friend Hidiho does - attacking and making up stories about innocents.

It was Tony Bennett, also in 2015,  who was unwise enough to take exception to the Bureau treatment of Hall’s arse-licking interview with Kollerstrom and the immortal way in which   Hall the “researcher”, after plugging Kollerstrom’s latest book, said that he didn’t know whether Kollerstrom’s Auschwitz claims were true or not because, said Hall, “I wasn’t there.”
Hall hasn't  got the education, let alone the nous, to realise the resonance of those words of his in that context. He doesn't know that he was repeating exactly what Nazis, and many other Germans,  said for thirty years after WW2 - until the photographs started to come out...

But Baldie climbed out of the cesspit sludge,gathered himself up and lumbered to the defence of Hall and Kollerstrom in his own inimitable, not to say unreadable, way. It was American authoress Gertrude Stein who wrote that poor, mad Ezra Pound, whose crank views were surprisingly similar in both content, expression and lunacy to Baldie’s (that’s why he spent twelve years in the nuthouse) was, “a village explainer, all right if you were a village, if not, not.”
Well Baldie has his villagers, even if they are a little whiffy with long-term cess these days, and once they’d all dried out, or crusted over, he addressed them in sonorous tones. Blacksmith was a liar, he said – but in two thousand words rather than four – Kollerstrom (whom he was pretty keen on) was not a Holocaust Denier. And he defined what a Holocaust Denier was before stating  the evidence for Kollerstrom's not being one, point by tedious and ill-written point.
Unfortunately, but not surprisingly, Bennett once again didn’t know his evidence from his elbow. It took fifteen minutes for us to select the documents showing the absolute truth of our statement  and another five to locate a quote from Kollerstrom in which the words he used were exactly those that define a Holocaust denier. And  Bennett himself had copied and pasted the definition in his post!  As usual Bennett was a) wrong b) backing the wrong horse c) unaware of the facts d) an ignorant bullshitter who provides false evidence. What else he might be, and exactly what his motives are, we have yet to find out.
Don’t people ever wonder whether those as childishly deficient in both facts, judgement and scruples as Hall and Bennett might be the wrong people to believe about anything, even the time of day?  But like I said, 2015 was the year when exhaustion and despair set in and people clutched at even more straws.

...Looking For a Way Out

Still, that problem is a diminishing one since, like at least two more of the Usual Suspects, Bennett has now started to disintegrate under the pressure of that dangerous stuff, emerging truth. His unravelling has a  curious resemblance to that unpleasant episode when he and his business partner Marsden, having worked their way into the trust of 3As forum owner Brenda Ryan, took advantage of her mental unravelling due to loss of belief in her cause to try and snatch the forum away from  her. Brenda eventually went to pieces and took to her bed, pursued by numerous email threats - of suing for libel! - from Bennett.  She’s been vacant and harmless ever since.
Now it's Bennett's time to join her. He's started abusing his own posters in precisely the same way that Brenda Ryan did as she began to weaken  and has taken to manic activity on twitter attempting to defend his reputation - and been greeted with mockery, indifference or contempt, just as Brenda was. Bennett is learning,  as Brenda did,  that when you argue a case without being able to ban unfriendly rejoinders  your arguments have to stand on merit alone. Stand? Merit? Under questioning twitter has revealed an incoherent old man struggling to present anything, like a dribbling tramp in stained trousers selling matches on a wet street corner, and a "case" that stands up, in so far as it's a case at all, like a plate of wet spaghetti. Perhaps that's why his tweets are now apparently being written for him by others.
It won’t do any good. By the way, Mr Bennett, when Brenda lost her grip the ones who turned on her with the most ferocity were her erstwhile biggest fans and disciples. Bye-bye, Tone.

Ode To The Tears Of An Onion

On the other hand we have the big story in which Gerry McCann, known previously for the public immortalization of one of his urinations, "opens up" on radio and discovers that he also possesses a heart.And aesthetic feelings.
I’m sorry, but I couldn’t bear the prospect of listening to it, not even for thirty seconds. I read extracts on the admirable Not Textusa blog but even with that distancing device I could hardly hack it. Their public performances these days just induce  a sense of embarrassment. As regular Bureau readers  are aware, I'm sure,  the parents have no choice at present but to mark time where they stand and say nothing more about the case, and not just because of Grange’s instructions. We aren't going to get anymore from them of  significance. We know and they know that it’s the quiet before the storm.
A little reminder to our conspiratorialist friends, as you would expect from the Bureau these days. The radio reviewer in the New Statesman magazine was not just impressed by GM’s latest performance but clearly sympathetic, respectful and moved – and without a trace of cynicism. The New Statesman is an innocent left-wing magazine for people who haven’t yet learned the hard ways of the world and its contributors are as suspicious of big power, police and monster-figures like Murdoch as anybody. Yet there we have the review. A useful corrective for that (now disappearing) catch-all that “it’s only protection that could have kept the McCanns free until now, so obvious is their [undefined] guilt”.
No it isn’t. Not as long as people like that radio critic – and unknown numbers more – take them at face value. Inside the bubble of this case we tend to forget just how large that number may still be.
But still - isn’t the peace and quiet wonderful for those on "our" side? Unlike the McCanns, the four McCann supporters and all the Usual Suspects, Bureau regulars  can look forward with that delightful sensation you get in the theatre when the lights  go down, voices die away to a whisper  and you know the next act is about to begin. And it's going to be a belter. Take your seats.
Best wishes Carole.