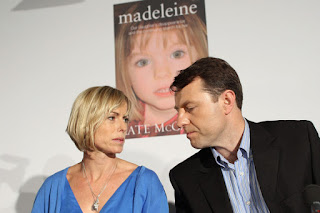 "My reason for writing it is simple: to give an account of the truth"
Kate McCann's preface to "Madeleine"

Nothing has done more to damage the myth of McCann “innocence” than Kate McCann’s decision to admit lying about  August 2 2007, when the couple put together an elaborate, if rushed, deception plan to conceal their own actions and the real course of the police investigation.
Under different circumstances that plan, and those lies, could have been defended by a clever lawyer as an aberration, a singularity in an otherwise spotless record, brought on by the stresses of the moment.
But the facts make that impossible. In inventing an illness, a virus, as a cover, Kate McCann was more prescient than she knew: the lie had uncontrollable consequences, was itself like a virus - first destroying  Kate McCann’s remaining credibility, then calling into question that of her husband’s version of the day, then running rampant through the supposed truthfulness of his blogs and, finally, exposing his public statements about the whole period from mid-July to the end of August as a pack of lies.
Why did Kate McCann make the 2011 admission? The answer to that is straightforward: at a few, critical, junctures of the case the couple haven’t been free to lie without restraint due to the presence of other parties.  In this case the PJ have the logs of their officers’ actions and the couple’s movements on August 2 so, of course, the truth was already known to investigators. But not to the outside world, yet.  Back in England during that brief period from 2009-2011 when possible acceptance and respectability rather than lifelong notoriety seemed to beckon, KM took the considered decision to get her version out first. Perhaps she felt she had no choice.

The Foundation Lie, as we can call it, the start of the contagion, has a feature almost unique in the case: full admission. The detailed admission in writing and without legal duress in a book she claims is "the truth" is effectively accepted by all “sides”. The lie is what is called in the legal process an “Established Fact" - one that is not in dispute and is therefore settled once and for all.
Remember here that we are not talking about newspaper stories or anonymous claims or suspicions or even typed timelines: we are dealing solely with what the McCanns have said, publicly and under their own names, free of third party corruption or spin.  But in a way that Kate McCann could never  have anticipated, the virus spread from the Foundation Lie outwards. All anyone has to do is turn from Madeleine and KM’s assertion that on August 2 they had invented a Gerry McCann  illness as cover, and look at Gerry McCann’s wretched blog about the same day written four years previously.

There it is:  “Today was a bit of a write off for me as I was laid low with a probable viral illness which meant I could not stray too far from the house!”
And confirmed the next day, August 3: “We were meant to go [to Huelva] yesterday but had to cancel because I was ill.”

It is now the most natural thing in the world to ask ourselves, “hang on, forget Kate McCann - if he’s been caught fibbing there twice, is he also lying elsewhere in the blogs?”
So we can turn to adjoining days.  Ignoring his untrue claim to have "taken the children out of the Kid's Club" on August 9 (they had no part in the decision to exclude them) as trivial, we find August 8. The blog has a brief and colourless short paragraph about an uneventful day, the highpoint being the departure of KM’s parents “early this morning”.
There is one dull sentence about the investigation, boringly reminiscent of those other uninformative one liners that readers found in many of the earlier blogs - met with the Portuguese and British police for an update on the investigation, (June 26); our frequent meetings with the police help us stay informed, allow us to feed information into the investigation and clarify information with senior officers (July 3); we had a longer meeting than usual with the Portuguese police because I had gone back to London last week .We have a good relationship with them (July 18) - all very chummy and routine. As was August 8:  GM writes: “At our meeting with the Portuguese police today we reaffirmed that we have to believe Madeleine is alive until there is concrete evidence to the contrary.”
Wait a minute. KM’s take on  that encounter is somewhat different. These are some of her words about it:
“The PJ had always been optimistic that Madeleine was alive, but now things had changed…Gerry was asked to leave the room…I was afraid… the sirens in my head were deafening… tell us about that night, they said… they responded by just staring at me and shaking their heads. I was reeling with confusion, disbelief and panic… Neves stated bluntly that they didn’t believe my version of events…I was sobbing… I began to wail hysterically…desperate gasps…. Gerry  gave the police his account of the events of 3 May and the reasons why he didn’t believe Madeleine had been killed in the apartment. Through his tears he pleaded…”
What? What's  going on?  Why has he concealed every single thing that his wife said happened? But wait another minute, if that's his version of that police meeting then what about those other ones we just quoted from weeks earlier but that his wife hasn't "revised" - how are we to know they were truthful? Looking further ahead,  how do we know that any one of the blog entries is  true?  And, again,  if a person's blog demonstrates clear evidence of lying and concealment about the investigation into his child's disappearance, of all things, then what about his police statements about that same disappearance? Are they true? And what about their endless public interviews that the police allowed them to get away with until April 2018 - how truthful are they?
Well Kate's Foundation Lie and resultant virus  give us a firm answer about the period she was covering in those chapters. Watch.

Kate McCann’s Madeleine description of the six weeks or so following mid-July – please remember this figure of six weeks – is one of melodramatic and apocalyptic hysteria and rage against a world that has turned on her and a police force that, having told her early in August that they no longer believed her version of events, has brought more terrifying news week by week and is now talking of a murder inquiry and mysterious dog searches suggesting death in the apartment. Life had been turned upside down, so fast was the police investigation developing.
It “…felt like an eternity. It was like being on some kind of endurance course run by sadists… we had no idea what was happening with the investigation… anger, bitterness, frustration, desperation… We felt like two lone figures with catapults fighting an army…" until, on August 20,  "Gerry contacted Carlos Pinto de Abreu, a human-rights lawyer in Lisbon…"
You get the picture.
What has Gerry McCann got to say about that? According to repeated statements made by Gerry McCann, public, on the record and transcribed, nothing  had happened in the investigation during those six weeks! Literally nothing.

Show it to us

Let’s see samples of how  Gerry McCann described these nightmare developments at the time,  talking on August 25 to numerous broadcasters and interviewers when he was in Edinburgh during the festival. The reliably supine BBC had invited him up.  All the italics are ours.
GM1: ... there clearly is a lot of pressure on people to write things just now, because they're in Portugal, when there's not actually very much happening. Uh, huh.
GM2: Absolutely, because, you know, there has been huge amounts written with no substance. Uh, huh.
GM3: … things have gone back to a degree of normality again and some calmness has settled in…Uh, huh.
GM4: Even early on, there was saturation coverage with nothing to report, and there are commercial decisions being made with filling column inches and time on TV…Particularly in the last six weeks, other than the recent searches, there has been nothing. Uh, huh. 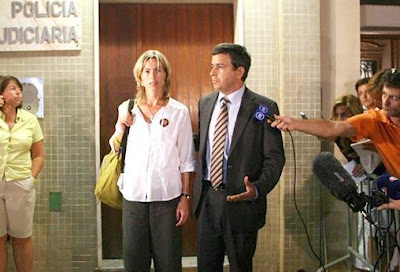 Coo-eee sur-prise! Nice Mr Abreu's here...
So little had been going on in the investigation, apparently,  that the couple had got themselves a criminal lawyer, according to wifey, five days before his Edinburgh stunt. Lucky that: twelve days  later and  he was in the nick trying to get them out. 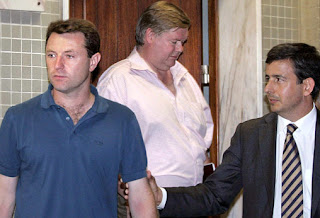 ...to get you out of the nick
We've never been bothered to go through the records to find further confirmation of the pattern: enough is enough. Again, after all this, which of the two do you believe?  The answer, obviously, is neither; they are a dead loss, useless to any investigation, any search, anything to do with their daughter since May 3. Nobody can safely accept anything from them without independent evidence in support. That goes for us, McCann supporters, opponents, police, lawyers and judges. All the way. If any of them, or our readers,  has a way of knowing when the pair  are telling the truth then, in Menezes’s immortal words – show it to us.
It follows, as night follows day, that it is impossible for their version of what happened after 7.30 PM on May 3 2007 ever  to be accepted. By that  we mean something much stronger than disbelief or “some people think they’re guilty”. We mean impossible, as in the disappearance of Madeleine McCann, the investigation of which  cannot begin, let alone proceed or conclude, until independent evidence for their account of that evening is found. Sure, people can try but without that independent evidence any investigative attempt will collapse at the first judicial hurdle. As the Portuguese, unable even to establish formally what crime they were investigating, were the first to discover.
No such evidence has been found by any of the three investigations over seven years active work– otherwise the parents would have been told by the police and the evidence would then have been leaked. Bureau readers can, therefore, decide for themselves whether the investigations are all a “farce” and no investigation has actually begun, or whether the two current investigations have  long ago written the pair off completely and proceeded on their way by, using a cricket term, "playing around them". Without admitting it.
Next time we’ll look at this business of “no other choice”.
__________________________________________________________________

The relevant Madeleine passages will be found in Chapters 13-15. We have "sampled"  many of KM's hysterical sentences about the "six weeks" rather than quoting them separately at full volume and inordinate length.
The deadening “GM blog” is to be found at: http://www.gerrymccannsblogs.co.uk/home.htm Unlike Kate McCann our professor does not give a preface to his blog - instead the first pages are, most appropriately, filled with financial details of how to give him and his fund money.
Gerry McCann’s Edinburgh publicity blitz can be found in: http://www.gerrymccannsblogs.co.uk/Nigel/id211.htm The reader should scroll down past the “telecinco” stuff.
A vintage performance of Professor McCann fibbing at Edinburgh  can be found here: https://www.youtube.com/watch?v=U88W_bAvgDI Note the immortal “there’s not much happening” at about 54 seconds, reminiscent in many ways of the words so shockingly alleged to have been uttered by a past mayor of Hiroshima.

The Portuguese inability even to establish the type of crime without the independent evidence: official finding - "Type of Crime: Unknown".
________________________________________________________________
For those with excessive time on their hands, suffer from aimlessness and have no fear of suddenly going mad, the Bureau's philosophy and allotments correspondent, Herr-Dr Karla  Spade, adds: the profound epistemological and legal problems posed by Frau Kate McCann's opening words about her book,  quoted above, are outlined here:
"In philosophy and logic, the classical liar paradox, or Karla Spade dilemma   is the statement of a liar who states that he or she is lying: for instance, declaring that "I am lying" or "everything I say is false". If the liar is indeed lying, then the liar is telling the truth, which means the liar is lying.