Not a Cigarette Paper Between Them 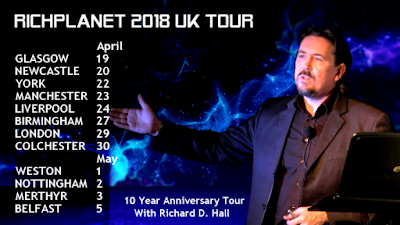 JB writes: I hadn't seen Richard D Hall’s 2008  comment in the Northern Echo that “there’s very strong evidence [my italics] we have been visited by a race from Zeta Reticuli, the small grey alien that comes from that star. There is evidence of other aliens from other stars, but less.” Well, that's all right then. Don't you love that detail about the "grey"?
He adds that once people breach the wall of silence that governments impose on us and we find out what’s really going on, “…the world…could be unrecognisable. There could be solutions to the energy crisis. We could find out man’s true evolutionary path, how the universe works, why.” And, even more important, it seems, "we could find out why the pyramids were built." The  universe I can take or leave but finding out why the pyramids were built - wow!
Hall himself, apart from being clearly insane, is a person of the utmost insignificance, which is why we didn’t bother to mention him in our last post - but his huge reputation amongst the  leaders of the anti-McCann camp, the Usual Suspects, is another matter, and not one that is adding to their credibility.
Hall’s belief there's “strong and compelling” evidence for alien infiltration removes any objective meaning at all from the word “evidence”: it is a perfect example of what we described yesterday as “masturbatory thinking” - thinking that tries to put  the contents  of one’s own imagination on exactly the same level as the real facts in the outside world. As such it is, of course, self-defeating: evidence, after all,  is, at root,  nothing  but a control mechanism to keep your imagination in line with the real world. Stop using it and you're in trouble, as Mr Hall and a number of the Usual Suspects demonstrate rather clearly. 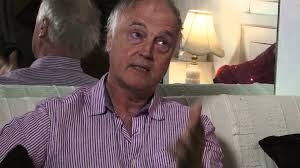 Kollerstrom: note the eyes - then look at his book titles
A couple of years ago I got cross at the only Hall internet piece I’ve ever seen, one featuring an academic acquaintance of Hall’s  being interviewed with the kind of fawning respect normally shown to the McCanns on Good Morning Britain, as well as a tour around Corpus Christi, the  academic’s old college, with faithful Hall lolloping at his heels like a dribbling but loyal spaniel.
Only the academic, Nicholas Kollerstrom, wasn’t quite your average prof. And, as five minutes watching him with Hall demonstrated, he had a Holocaust hang-up and was using Hall to plug his latest book about it. So I expressed my disgust in the Bureau, adding that Hall, the Bennett disciple and associate, and his choice of guest  perfectly illustrated the moral depravity that hangs around his cesspit.
I'd quite forgotten about it, though,  and didn't discover until yesterday, checking Hall's stuff on Google - it was like going backwards down a helter-skelter - that the Chief Pitleader himself had read the post back in 2015 and got all cross. I had written that “ [Hall’s] weasel words that he wasn’t supporting the book,  because he didn’t know whether it was true or not since he “wasn’t around” at the time of the Holocaust were laughably mendacious.”
I added:

“Didn't know whether it was true or not? Anyone with more than a primary education knows that the Holocaust details have been established with certainty… There are no mysteries about its execution, though there are plenty about the human behaviour behind it.

Yet Hall, like Bennett, has fired first and left the known  evidence for another time, or rather, again like Bennett, for never, and has put his plug out for an author who claims that the place where my stepfather’s large family was slaughtered, Auschwitz, wasn’t bad at all – why it had a swimming pool and a library for its lucky guests. And Harry’s family couldn’t really have been gassed since there weren’t any gas chambers there.

We’ve tried, unsuccessfully, on the Bureau to shame people into deserting sites like Havern’s ...” – the boring rest is on  https://jillhavern.forumotion.net/t11743-blacksmith-bureau-yet-another-untrue-and-bitter-attack-on-cmomm-tony-benentt-and-richard-d-hall

Mr Bennett didn’t like those views at all, mincing to the very edge of the Pit and crying down at his  disciples  in that strange, weirdly unmistakeable  tone of his – part hysterically outraged vicar, part whorehouse doorman dwarf  with a permanent erection  – that he would “expect all members here to repudiate them with the full degree of contempt that they deserve. And perhaps some might now agree with me that Blacksmith has never been a true McCann-sceptic.”
Goodness me! Proscribed!
He then went off on one, as usual, as can be seen on the link above. Shortly afterwards he gave, with a lofty dignity reminiscent of Judge Tugendhat, his judgement: “Blacksmith made this on-the record, false statement: "[Kollerstrom] is a Holocaust-denier".


“But, in a nutshell, Kollerstrom is not a Holocaust-denier. On the contrary, he fully concedes that masses of Jews were killed by the Nazis.
“But, anyway, the plain fact is, wholly contrary to Blacksmith's claims, Kollerstrom is not a Holocaust-denier.”
Look at that windy but not-so-subtle "on the record", translation: Blacksmith can't withdraw this libel now (I might even send it to Richard). Oh, how I shivered.
The statement was, naturally, accepted as fact, by his assembled floaters.  Still is, no doubt. That's what they do.

Now let's pause here, Bennett. Quite apart from the mirth you generate I don't mind how you spend your time posting about double glazing makers, versatile concrete mixers, show business sodomy with a bottle, or the sordid McCanns. But when you decide to stray into the real world, my world, and respond to serious  matters  like a post describing the fact that, after nameless and unspeakable horrors, my stepfather’s family was gassed in the Auschwitz  chambers with the very Zyklon-B  that Kollerstrom denies was used there, you'd better have something more to offer than support for the Holocaust distorter  who demeaned those deaths, you filthy, squalid, demented, fucking ignoramus.
Right, that's out of the way. Now  Bennett’s evidence that my statement that Kollerstrom is a Holocaust denier is "false". Let's see it; show it to us.

Are you kidding? There isn't any to show. There never was. The buffoon was lying through his teeth. As usual.
Two years ago, with plenty of time to have sought out the facts about Hall's friend. Nothing. And no correction.
Kollerstrom is not just relevant to Bennett and the Pit, as well as Hall and those who think like him. His entire way of thinking and operating is, in fact, a template for that of the "truthseekers" and most of the Usual Suspects: you couldn't  get a cigarette paper between them, so close are their approaches, their vanity, their methods  and their self-deception.

You were wrong, Bennett, you fucking compulsive liar. So anxious were you to defend your benighted site and your lunatic friends and associates who think exactly like you and whose "scholarship" is just like your own, that you even lied about responses to the Holocaust itself, you disgusting, morally dead,  creature.

Certainly, for those interested. "Too long!" a remaining Pit dweller, will cry, adding, "we need short, snappy, stuff, like Blacksmith falsely accuses Kollerstrom. Sources are boring!"
Below are the evidence sources, which I didn’t even bother with at the time: the professor’s words, coupled with my own knowledge of the relevant history - considerably greater than Kollerstrom's, I can assure you -  instantly told me everything I needed to know. But unlike Bennett and the Usual Suspects I was telling the truth, knowing the facts would back me up.
https://codoh.com/library/authors/1580/
See Nicholas Kollerstrom, "The Auschwitz ‘Gas Chamber' Illusion", Website of The Committee for Open Debate on the Holocaust, 2008. On page one we have:

"Amongst all the archival material for the German Third Reich," he writes, "there has always been a notable lack of documentation* to support the existence of an intentional mass-extermination program – of Jews, or anyone else."**

*Lack of documentation:
There has never been a "notable lack of documentation" about the intentionality. Many  of the thousands of documents were carefully phrased and guarded and it is these that professional Holocaust deniers like Kollerstrom and his colleagues have concentrated on. Just like Bennett, they select and  distort, as well as misunderstand, the evidence. But the key sources expose the truth.


**Intention:
The minutes of the April 16/17 1943 Hitler & Ribbentrop meeting with Hungary’s leader Admiral Horthy, called to speed up the “special treatment” of the 800 000 remaining  Jews in that country, are conclusive in revealing the Holocaust intention. Horthy, who was dragging his feet, said openly that “surely he couldn’t beat the Jews to death”, to which foreign minister Ribbentrop replied, with Hitler (who according to the Holocaust deniers knew nothing about it) sitting beside him,  that they “must either be  annihilated or taken to concentration camps. There is no  other way”.
Hitler, the “man who wasn’t told about the Jew killings” then said: “They had to be treated like tuberculosis bacilli, from which a healthy body could be infected. That was not cruel,” he added, “if one remembered that even innocent natural creatures  like hares and deer had to be killed so that no harm was caused. Why should one spare the beasts who wanted to bring us Bolshevism once more? Nations who did not rid themselves of Jews perished”.
On 4 October 1943, Heinrich Himmler made a speech, in Posen, to about fifty senior SS men. In it he said, “I also want to mention a very grave matter here before you in complete frankness. We can talk about it quite openly among ourselves, but we shall never speak of it in public. Just as we did not hesitate to do our duty as we were ordered to on 30 June 1934, and stand comrades who had lapsed against the wall and shoot them, so we have never spoken about it, and we shall never speak of it.
It was a matter of tact, for all us, thank God, never to speak of it, never to talk of it. It appalled everyone, and yet everyone was absolute in his mind that he would do it again if ordered to do so, and if it should be necessary.
I am referring now to the “evacuation” of the Jews, the extermination of the Jewish people.”
And he added: “Most of you know what it means when 100 bodies lie side by side, or when 500 or a 1,000 lie there. To have stuck it out – apart from exceptions caused by human weakness – and to have remained decent, that has made us tough. This is a glorious entry in our history which has never been written, and can never be written.”

http://www.codoh.com/newrevoices/nrillusion.html
https://www.indexoncensorship.org/2008/04/debate-the-kollerstrom-question/
“Nicholas Kollerstrom is a Holocaust denier, although he would, no doubt, prefer to be called a ‘revisionist’. He believes that ‘no German has ever placed a Jew in a gas chamber’ and that the only use to which Zyklon B gas was put at Auschwitz/Birkenau was that of delousing the mattresses of its ‘guests’; ‘guests’ who otherwise ‘enjoyed’ the very best hospitality that the Third Reich had to offer. That may sound rather strange and unhistorical, but that’s the view set out by Kollerstrom in an essay on school trips to Auschwitz published on the website of the ‘revisionist’ Committee for Open Debate on The Holocaust (CODOH)”
https://www.thejc.com/comment/comment/respectable-revisionists-1.63523
http://www.jpost.com/Jewish-World/Jewish-News/Iranian-website-promotes-Holocaust-denial
at 19:11