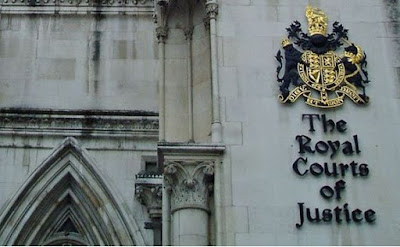 Welcome to the Bureau court reporting service and extracts from day two of this gripping drama.
The morning was dominated by legal arguments  over defence submissions which, after lengthy consideration,  the judge rejected. Falling back on what he called the precedent of Anglo-Saxon common sense rather than the common law - muttering to himself that both were identical - he ruled that the defendant was to be referred to exclusively as Mr. Textusa, occupation: a hermit.
On the defendant's application to be a litigant-in-person the judge held that the normal right to do so faced "enormous difficulties". How, he asked, can the majesty and intellectual subtlety of the law, or even its dignity,  be expressed by a person wearing a two-foot square cardboard box over his  head?
He rejected the national security argument for such a measure but accepted that, as a hermit, a human rights argument could be made [see the U.S 1970s "smack a midget for Norm case" - Short People .V. Randy Newman, a singer] in his favour on the grounds that dealing with real people rather than screens might induce health problems.  He reserved judgement.
IN THE HIGH COURT OF JUSTICE

In the matter of Townsend .V. Textusa.