The Death of MancCannstein's Monster 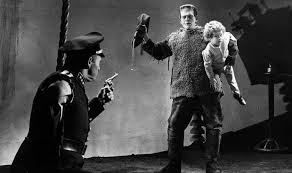 To sum up the deception: taking the three famous timelines chronologically, readers can see for themselves not only how a hearsay sighting of a person with a child was turned into a monster but exactly how the group, beginning with O' Brien, Gerry McCann and Payne* on the night of May 3, conspired  to make him the history and centre of the entire affair  by creating  a “slot” for him compatible with the Tanner abductor's  time of departure, all  with supposedly remembered suggestive (or at least "possible")  evidence ** – alas, no longer available once  the police had been called and the apartment trampled – of his presence. Doing so involved  them in altering and disguising  their real movements. 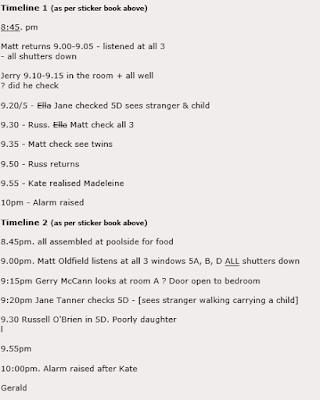 Keep It Simple - It Is

Forget detailed and head-spinning analysis: that's what they always wanted you to look at and get confused by.***  Just keep it very simple, look at what they say they were doing in the first timeline, which takes about two minutes, watch them alter them in the second to create the slot and then look at the final typed timeline. All the timings have been changed progressively with one intention, initial estimates being replaced by ludicrous pseudo-exactitude to squeeze them in. In the third document, indeed,  which states that “all timings are approximate” the Oldfield movement has been shunted from 9-9.05 to 8.57 (!!!) PM and Gerry McCann is awarded a watch to look at as he supposedly leaves the bar for the apartment at, why, exactly 9.05.
It is, as both the PJ and Scotland Yard know, all in vain,  as is normally the case with criminal group lies. Reality – always in flux and movement – is too complex to be defeated by conspiracies. The result is like watching chimpanzees trying to operate a model railway.

As they discover while they struggle to get the invented story straight over the next four days. Either their timings make GM shoot away from Tapas station too soon or send him chugging off too late,  put him on a direct collision course with Oldfield or leave him gormlessly staring down at his daughter in bed with love in his heart  after she’s been snatched  or as the crazed monster is forcing his way in.
Or Oldfield has to be struck blind so he can’t see whether shutters are open or closed; or the unwelcome constraint of Wilkins’ presence at the gate  means that MancCenstein  must be seizing the child just as Tanner is watching him “hurry away” – unless  Tanner is held at a stop signal while the monster is kept circling a loop until released to move.

But now let’s turn to the monster’s unlikely origins on the twilit streets of Praia da Luz that night. 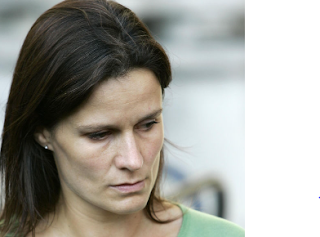 Like most people we tend to be generous to the  wily  but seriously fragile Jane Tanner, never having suggested that she invented her sighting, quietly admiring of that stuff she spun to an aghast and bewildered PJ about the brutish Anglo-Saxons always leaving their children unsupervised - quite the cultural historian is Jane, at least when attempting to hang onto her child. And who can't  warm to a woman who confessed, Textusa,   that the thought of swinging with Gerry McCann, either on the top of a big round table, no doubt, or perhaps in an antique chaise d'amour, made her retch?
But let’s face it, and ignoring her naughty refusal to tell Leicester Police whether she identified Murat in the van that famous night or not, as an eyewitness she’s a fucking disaster.**

With Operation Grange still running it cannot permit itself to give the full facts about its relationship with Tanner and the holidaymaker, for reasons we’ve given elsewhere. Full visibility will only come after the conclusion of the investigation. Thus, we’ll indulge nice Mr Redwood for his identification exercises  which are far more irregular than Amaral’s (and the Yard's) van episode ever was, will  never be brought into court  and which extend a great deal of slack to Tanner. We’ll accept also that, in order to gain  agreement or co-operation in the  exclusion exercise, he posed the  holiday-maker against a non-police, collective  late sketch, not against details exactly matching her police eyewitness evidence.
We’ll also have to accept various other liberties -  that the origin of the holidaymaker’s clothes is unknown, that what he was actually wearing is unknown, that whether he has been asked to grow hair etc. to the length it was in 2007 is unknown and, equally important, the time and direction of his presence is completely unknown.
But that doesn’t matter: the only aim of this elaborate television performance by Redwood was not to question Tanner’s eyewitness evidence or to build a case or to make an identification - that was already done - but to announce formally and definitively but without causing trouble for non-suspects, that the abductor, in the timescale and form claimed by her group,  does not  exist, end of story.  Any  court will accept that.

So How Did She Do? 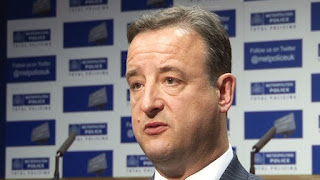 Mr Redwood is one of those people whose richly Celtic  warmth and niceness  is likely - look at his eyes - to be a signal of something quite else  and when he's as nice on Crimewatch about how strikingly and wonderfully similar the holiday-maker' appearance  and M/S Tanner's versions are, then it's time to start looking for the open door before the cuffs come out.
The sub-text beneath the Carnish sweetness is, of course errors occur, of course it's easy to make mistakes, no, no, it doesn't mean your behaviour is questionable, nobody's going to think any the worse of you my dear, not at all my lovely, no, no, you are completely above suspicion of anything. Mistakes happen.
So here's the holidaymaker, around since 2013, though the McCann clique don't seem to be too keen on discussing him, do they?  The photograph of the man M/S Tanner saw. ***

Looks like a syrup-of-figs   on the top of his head, doesn't it?  Mr Redwood clearly doesn't want us to see too much of the real hair yet, does he?
But before we get onto objective metrics about such evidence can we say something from the heart? Look carefully at him.
And then look at this, an internet collation of some of the vile, stinking, filthy images  that the  McCann camp and its beshitted spokesman created, revelled in and thrust at us month after month, year after year as the truth of the world  until Grange finally stopped them diverting the investigation any longer. But that is only their world, the McCann world. 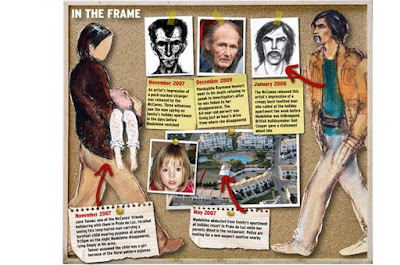 They could be inhabitants of another planet, couldn't they? And they are: created by the  disturbed and  fearful minds who, with the gift of free will, took the decision to enter it and be bound by it.   Then look back at the mild, inoffensive and thoroughly decent-looking human being that those criminals claim is the origin of their filth. No, the photograph shows an inhabitant of the real world, our world, not theirs,  the one they will never re-join.  They are now  in hell, of their own invention and their own actions. Just looking at their creations on the page makes one want to have a wash. Now, back to work.

JT to the police in 2007: He was dark-skinned.
The person she saw at twilight: He is light skinned. He is light-skinned! JT  accuracy score: 0/10.
JT: About 1.7M high.
Person: The Yard have provided no measuring marks. 0/0
JT: Aged 35-40. Slim build.
Person:  Six years on and he is clearly younger than 35-40. 5/10 + 9/10
JT:Very dark, thick hair, longer at the back.
Person: Darkish and wavy, textured not lank. Completely incompatible with the later non-police artist's version. Hair that will not lie flat at the back unless wet. Prominent sideburns. 5/10.
JT: Trousers linen type, straight, beige to golden. Adds 'the same as "corticine",' a cork-based, dark brown floor covering,   in colour.
Person: Linen, beige. 10/10.
JT: Shoes dark, "classic type," with a slight heel.
Person: Brown. Unheeled. 5/10.
JT: Jacket a dark "Duffy"***** - not duffle - jacket. These are defined as extra-warm insulated kagools or anoraks. She adds that it was "not that thick".
Person: A short blue-grey lightweight casual jacket or anorak. 1/10.
Additional or Overall qualities
JT: A hurried walk.
Person: Not known, no information provided. 0/0
JT: His clothes were somehow unusual.
Person: The clothes are bog-standard casual resort wear. 0/10
JT: He was "very warmly" dressed.
Person: He is wearing lightweight resort wear. 0/10
JT: Not a tourist. 0/10.
Person: A British tourist.
So , finally, in 2018, you have a good measure of how accurate and dependable Jane Tanner is as an eye-witness. Leaving completely aside that she then willingly joined the rest of the conspirators to turn this  minimal and misleading little blur - essentially a flash of pyjama'd  legs, a patch of beige at the bottom and black at the top, clouded completely by a set of (invalidated in the photo above) prior assumptions  - into a criminally misleading decoy that took six years to destroy, we have the verdict: utterly worthless.
As Amaral always suspected.

* together O Brien  rogatory, section 3.
**  evidence McCann police statements, Oldfield rogatory, Madeleine.
*** confused by examples on almost every page of rogatory interviews, especially by the males. The confusion is so vast and spidery that the group, Payne particularly, cannot makes sense of  their own words, get completely lost  and the interviews come to temporary halts while the police attempt to retrieve the thread of meaning.
**** months later The disgraced and beshitten Mitchell's words were fed to the media on behalf of the McCann defence team when the pair  were safely back in the UK.
***** A  criminal conspiracy to mislead the police The irrefutable evidence is in front of you, documented. The police were misled and the McCanns insisted to the PJ that they must make this phantom the focus of their efforts. Had they succeeded the police might still be looking for the dark-skinned, somewhat demonic,  foreigner today.

* made her retch Tanner rogatory (less colourfully). Supposed cultural history of leaving children alone in her police statements.
** she’s a fucking disaster. Look at her eyewitness statement again. Starting with "dark-skinned" and ending in "not a tourist".
*** photograph Crimewatch archive on net.
**** Tanner's words Both police statements and one reference to the bogus creation of the McCann camp (the hair)
***** Duffy definitions Google